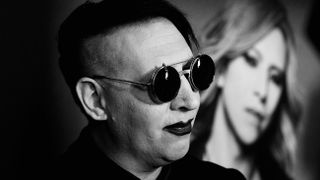 Marilyn Manson asked for a goat to be delivered to the set of TV show Salem – which he later painted because he wanted a black one.

The shock rocker plays the role of creepy barber/surgeon Thomas Dinley in season three of the hit TV show, which premieres on WGN America this week.

And during his downtime on the set in Shreveport, Louisiana, Manson says he became obsessed with a black goat he saw in recent movie The Witch. He asked Salem bosses for his own black goat – and he took action when they delivered a red goat instead.

Manson tells Rolling Stone: “I’d seen that movie The Witch about a week into working on Salem, because I’d missed it in the theatres. And the goat in the movie, Black Phillip, became an obsession of mine.

“So on the last day of the shoot, I requested a black goat to play with, just off set, just for my own recreational purposes.

“But they brought a red goat, so I sang quite simply. ‘I see a red goat, and I want to paint it black.’ And everyone really got a kick out of it.

“And I did – they did let me paint it black. It was ornery.”

Manson also discusses a scene in Salem where his character eats a leech. And he says the animal welfare people on the set of Salem prevented him from eating it for real.

“I was a little disappointed that the leech handler wouldn’t let me be a little bit rougher with them,” he says. “They don’t really have nervous systems, technically.

“But I remember as a little kid I used to pour salt on slugs. They’re probably from the same family. And I have eaten escargot before, so I figured why not eat the leech? It’s not that big of a deal.

“I wasn’t technically allowed to swallow it. So we will agree to disagree to agree that there is a leech in my mouth that did not necessarily get eaten. I don’t want the ‘leech union’ to come after me.”

The singer also discusses the similarities between himself and the Dinley character and adds that parts of the set mirror his real-life living room.

Manson will release 10th album Say10 on February 14 next year.

The Marilyn Manson Quiz: how well do you know Antichrist Superstar?