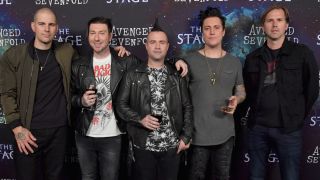 Avenged Sevenfold at the launch of latest album The Stage (Image credit: Getty)

The band are locked in a legal dispute with Warner Brothers and last week sneak released their new album The Stage via their new label Capitol Records. But as rumours circulated that Avenged Sevenfold were about to reveal details of the new album, Warner announced a 2CD compilation called The Best Of 2005-2013, which is set for release on December 2.

A7X’s ‘deathbat’ logo started appearing in cities around the world last month before Fozzy frontman Chris Jericho, in collusion with Shadows, posted fake details about Avenged’s seventh album, saying it would be called Voltaic Oceans and that is would be issued on December 9.

Shadows says those rumours led to Warner’s decision to release the Best Of and he adds that band have had no input on the compilation, which he describes as a “cash grab” on the part of Warner.

Shadows tells Metal Hammer: “They saw the tweet that Chris Jericho put up, assumed the record was coming out December 9, and tried to undercut our sales and confuse casual fans.

“We didn’t find out it was happening until we saw it online. They’re just trying to make a cash grab. The fans will figure it out, it’s a viral world and people will know. Go on Spotify and make a playlist of those songs, it’s easy.”

Asked to give an update on the current state of play in regards to their relationship with Warner, Shadows adds: “The reality is we’re still in a lawsuit with Warner Brothers, we’re exercising our right of the seven-year rule which is a law in California that says you can’t be in a contract longer than seven years, and it comes down to feeling that nobody at that company cared or knew about Avenged Sevenfold any more.

“All the higher-ups had gone through multiple regime changes. So we took way less money to go somewhere else, do what we felt was right for our career, take on a lawsuit, than put out a record and let it fall by the wayside.”

The decision to sneak release The Stage came about because Avenged Sevenfold were not keen on drip-feeding songs from the album. They wanted fans to get their hands on it all at once – a move Shadows says Warner would likely have blocked.,

“None of this cool stuff would be happening if it was on Warner Brothers,” he says. “There’s no way they would let us do this.”

The Stage is the follow-up to 2013’s Hail To The King. Avenged Sevenfold released a video for the album’s title track earlier this month.

Avenged Sevenfold: the first reaction to their new album The Stage