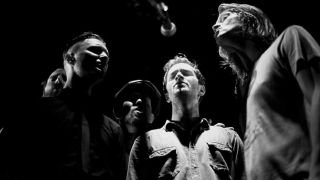 Lazuli and Moon Safari are heading out on a joint UK tour this month, sponsored by Prog Magazine.

It’s the first time that the French group Lazuli have toured Britain, although they appeared at the Summer’s End Festival in 2011 and 2013.

Swedish six-piece Moon Safari come to the UK as they release their new Live In Mexico double CD.

The joint headlining tour’s promoter Nellie Pitts of The Merch Desk said: “It is absolutely wonderful to have two of Europe’s most creative and original bands appearing on the same bill. Their attraction goes much wider than progressive rock audiences and they will appeal to anyone who enjoys live exciting, vibrant music.

“Anyone who saw Lazuli at either Summer’s End shows – or on one of their many European dates such as Loreley – will be aware of how striking they look and sound. Moon Safari also have an ever-growing following in the UK so we are thrilled they are coming back to enchant us once again with their special harmonies and magical melodies.”