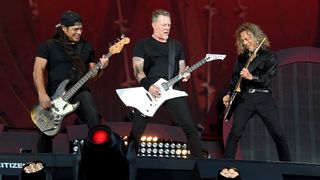 Metallica have announced that they’ll play a show in New York this week just for their Fifth Members fan club.

The news comes hot on the heels of their appearance at the Global Citizen festival in the city yesterday (Saturday) which was streamed across the world for free. Watch their performance of Master Of Puppets below.

And James Hetfield, Lars Ulrich, Kirk Hammett and Robert Trujillo reveal they’ll spend a little more time in the city ahead of the launch of 10th album Hardwired… To Self-Destruct.

The band say in a statement: “We just walked off the stage at the Global Citizen show in New York’s Central Park and we had such a blast that we’re going to keep the good vibes rolling by adding another show to our New York run.

“This Tuesday, September 27, we’ll be playing a special show for our Fifth Members only at the intimate Webster Hall – and if you’re a member you have a chance to pick up tickets and join us.”

Tickets are priced at $25 each and are limited to two per person from Metallica’s website. Entries close today (Sunday) at 6.45pm EST. Winners will be emailed with a personal code if successful.

The band add: “If you can get to New York City from wherever you are this Tuesday evening and you’re a Fifth Member, check it out now. Hope to see you there.”

All proceeds from the show will go towards the City Harvest charity, which helps feed 1.4 million New Yorkers who are living in poverty ever year.

Last week it was announced that Metallica are planning on playing a career-spanning set on Howard Stern’s radio show on September 26. On the same day, the band will record a special edition of SiriusXM’s Town Hall series, hosted by David Fricke, where they’ll answer questions from fans in the SiriusXM studios in New York City.

The Q&A will then be aired on a limited-run Sirius station called Mandatory Metallica, which launches on November 16 and runs through to November 23.

Metallica’s Hardwired… To Self-Destruct will be released on November 18 and the band have a handful of dates in Latin America scheduled.

Why Kirk Hammett didn’t write much for new Metallica album