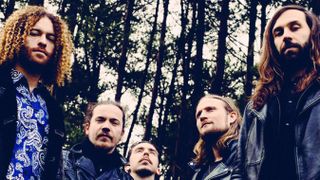 Messenger have been forced to pull out of this weekend’s TeamRock-sponsored Stone Free festival.

The two-day event takes place in London on June 18 and 19, and the UK outfit were due to take to the stage on Sunday. But they’ve had to take a step back due to “unforeseen circumstances.”

The band say in a statement: “We have had to pull out of the Stone Free festival at the O2 this weekend due to unforeseen circumstances. But don’t worry, we have been replaced by the mighty Teeth Of The Sea – an absolutely brilliant band. Get there early, watch their set – you’ll be blown away.”

Teeth Of The Sea add: “Well, bimey – turns out TOTS are a last-minute addition to Stone Free Festival at the O2 on Sunday – on a bill headlined by none other than Rick Wakeman.

“We’re on at two at the Indigo on an afternoon bill also including Knifeworld and Wilko Johnson.”

The weekend festival will feature a TeamRock Zone where fans will be able to get closer to artists appearing at the event, play games and relax at the bar.

Tickets for the event are still available.