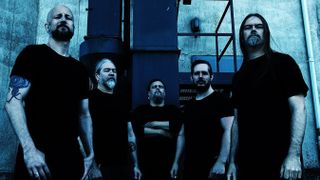 Meshuggah have released a video for their track Clockworks.

It features on the band’s eighth album The Violent Sleep Of Reason, which came out today (October 7) via Nuclear Blast Records.

Speaking to TeamRock, Meshuggah drummer and lyricist Tomas Haake said of Clockworks: “It’s one of the songs on the album that isn’t about current events, although it kind of ties in with a lot of that stuff.

“Tricky one to play, not just for the drums but the guitars as well. It’s one of the most challenging things we’ve written in some time.

“Lyrically it’s about looking into yourself, as if your mind was a clock of sorts, and you want to change the way you think and act and react to the things going on around you.

“So it’s seen as a piece of a clock that you take out in your mind, disassemble all the little cogs and wheels in your mind, and put them back together to make sense of yourself.”

Meshuggah will head out on the road next month across Europe in support of the follow-up to 2012’s Koloss.

Meshuggah's track-by-track guide to The Violent Sleep of Reason