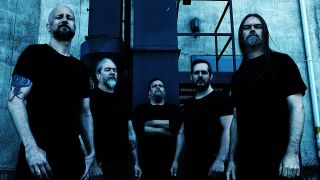 Swedish tech-metal pioneers Meshuggah will release their eighth album, The Violent Sleep Of Reason, on October 7, through Nuclear Blast Records. Anticipation for new Meshuggah material always high, and this time around they have, according to drummer and lyricist Tomas Haake, recorded the album live to give it a rawer and more spontaneous edge. Here Tomas talks us through what is sure to be one of 2016’s biggest events in heavy music.

“It’s one of the songs on the album that isn’t about current events, although it kind of ties in with a lot of that stuff. Tricky one to play, not just for the drums but the guitars as well. It’s one of the most challenging things we’ve written in some time. Lyrically it’s about looking into yourself, as if your mind was a clock of sorts, and you want to change the way you think and act and react to the things going on around you. So it’s seen as a piece of a clock that you take out in your mind, disassemble all the little cogs and wheels in your mind, and put them back together to make sense of yourself.”

“This is one of Marten’s (Hagstrom, guitar). For every album he tries to kind of write song that is old school thrash in its approach. That’s kind of where we come from, but it’s hard to do that in our music. But this is his version of old school thrash in 2016. This song kind of ties in with the religious and political themes of the album, but religion is portrayed as a monster that’s coming from beyond time and space for Earth. And that could be an asteroid; there are lyric lines like ‘You can see us coming for a thousand years’ because we have telescopes now that could see asteroids coming thousands of years in advance. But it’s my metaphorical take on the idea of the apocalypse. This monster could be seen by many as a deity coming back to destroy what it created.”

“It’s another one that focuses more on religion, and for this one I was visualising a city that is run by these skewed ideas of scripture and writings. Again, the fear that I have for that and the dislike I have for that in the world is very prevalent.”

“Written by me and Fredrik (Thorndale, guitar), it’s one of the two really heavy ones on the album. It’s very different tonally. It’s one of those things that I’d never heard us or any other band do before. In a sense it’s almost like twelve tone music – there are no rules – so it’s quite different. It’s seen through the idea that, if armed conflict was a person, it would say this if it was talking to you. It turns war into a person.”

“It’s a tricky one for people to hear immediately as there’s no backbeat. So when you play it to people they are initially like ‘What?’ but it turned out really cool. We’ve never really been big on title tracks, and you often think that if you do a title track then it has to be the most accessible, but this really isn’t. It’s about current events; human catastrophes that have intensified over the last few years. I mean, the situation has been going on in the Middle East for some time now. You have all these refugees who are trying to save their own lives, and you see countries shutting their borders to them. How do you deal with that on a political and economic level? I’m not sure, but this is about the humanitarian treason that I see in those situations.”

“Marten wrote this one – he has one foot in stoner and one foot in metal – and that stoner aspect is something we try and have in every album. It’s been there for the last few albums, a nod to the more sludgy things. We decided to do this song without a click track to make everyone’s natural pacing come out. We tried lots of different tempos, and we finally decided on this one, but if you listen you can hear that it starts at a certain number of beats per minute and by the end it’s changed completely.”

“Lyrically this is a take on dictatorships, or too much power being given to one person and the abuse of that power. I think we’ve seen it time and time again over the years, with horrendous results. People with total control and power leading to the deaths of hundreds and millions of people, and this song is simply about wanting to take that person and put them in the ground.”

“It’s one of those tracks that comes from drums and then you add riffs. Nostrum is another word for a placebo, a drug that has no actual effect, and that ties into religion, and how it is still the opiate for the masses. The hypnosis of these people, which is so far in the opposite direction of what normal, modern thinking people feel.”

“A little more old school sounding, a little more thrash metal sounding in a sense. Lyrically it’s about the conundrum of retaliation. I saw one of those reality shows on television, a court room thing, where this family had lost both of their daughters after they had been killed by this guy. And you saw in the father this real desire to kill him, but at the same time the way he functioned as a person was as an all-forgiving personality. You could see how it was tearing him apart. So this is my take on that, and that’s something that’s weird for me. I’ve never had anything happen to me like that, but you have to ponder what your reaction would be. Would you hunt them or would you turn the other cheek?”

“Another one from me and Marten, which starts off extremely sludgy. It’s an Orange amp on total distortion – I really dig how it came out. It’s inspired by current events. I went to a pub and there were four guys sat opposite me and they were all looking down at their phones. One guy started saying something to another one and he wouldn’t look up, he just said ‘Yeah, yeah, Facebook it to me.’ Didn’t even wanna hear him talk. It’s about the dissociation that we are going through in this time. With the evolution of this, where are we going to be in ten years?”

The Violent Sleep of Reason is out October 7, via Nuclear Blast.

Every Meshuggah album ranked from worst to best