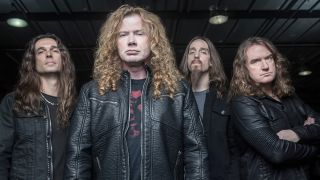 Megadeth are currently in the process of recording the follow-up to 2016’s Dystopia – and it’s expected to be released in the coming months.

Mainman Dave Mustaine checked in back in December, telling Eddie Trunk: “Guitarist Kiko Loureiro and drummer Dirk Verbeuren have both been out to the studio to start recording and we're now in the process of finalising all the arrangements.”

Now, in a new interview with Kerrang, Mustaine says the band are “trying to keep with that real heavy thing” and also reveals what his son thinks of the record.

Mustaine adds: “Dystopia was more of us doing what makes us feel good – there’s a lot of super heavy, fast drumming at the end of some songs.

“My son was in here two days ago and when we were doing Dystopia, he was listening to the songs and making comments. The ones he commented on were the ones that got the best response.

“When he came over this time, we were working on a song that has the tentative title The Dogs Of Chernobyl. The song comes in super powerful and strong, and my son goes, ‘Oh god. That’s heavy as hell!’ and I just started laughing.”

Last week, Megadeth released a trailer for their upcoming anthology Warheads On Foreheads, which will launch on March 22 via UMC.

Megadeth: Warheads On Foreheads
Megadeth look back on the 35 years of thrash with this 35-track anthology, featuring tracks including Mechanix, Wake Up Dead, Hangar 18 and The Threat Is Real.View Deal