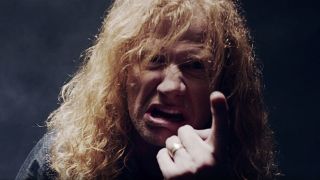 Megadeth have released a video for their track Post American World, taken from latest album Dystopia.

The promo features Lamb Of God drummer Chris Adler, who guested with Dave Mustaine’s band for their 15th record – and who’s now been replaced permanently by Dirk Verbeuren.

Mustaine says: “Post American World was an eerie video shoot right from the beginning. Shot in just one day with only our guitars and drums, I knew that this was going to be amazing.

“There’s something to be said about the simplicity of an artist and only his guitar or drums. This is a less-is-more concept, and director Jake Macpherson nailed it.”

The 18-show run commences on September 20, with tickets on sale on July 22 (Friday). Megadeth were forced to cancel the last two dates of their current European tour after bassist David Ellefson broke his foot.

Meanwhile, Verbeuren’s former band Soilwork have wished him well with his new position. Vocalist Bjorn ’Speed’ Strid says: “Together we have created a beast of a band. I strongly believe this is very much a new era for us – and that we still have so much left to say.”