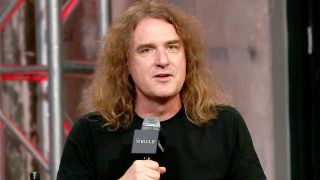 David Ellefson says that Megadeth “has been reborn.”

The bassist reports the band’s critically acclaimed record Dystopia has given them a new lease of life – and that they must let the classic lineup “rest in peace.”

He tells Greensboro News & Record: “There was always this calling from our fans to revisit the Rust In Peace lineup, which we had all moved on from, including those former members.

“So, we all had a meeting. Had a discussion. We even did a little bit of playing together. And we realised that it would be better to remain friends and leave that legacy sit as the heroic memory that it is in the minds of so many of our fans.

“It was clear – the past is the past. We’re going to let that truly rest in peace, if you will. No pun intended.”

Ellefson and frontman Dave Mustaine met up with former members Marty Friedman and Nick Menza to discuss a potential reunion last year following the departure of Chris Broderick and Shawn Drover – but they recruited guitarist Kiko Loureiro and Lamb Of God drummer Chris Adler to record their 15th album instead.

Ellefson adds: “What’s really cool about Dystopia is that fans used to always clamour for things of the past. Those days seem to be over. I think we finally transitioned past that. Megadeth has been reborn.”

Megadeth have kicked off their string of festival appearances in the US and Europe, and will appear at the Download Festival in June.