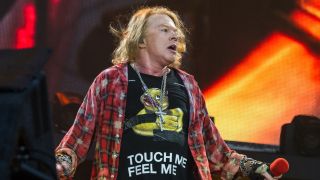 Guns N’ Roses were detained by Canadian border officials ahead of their show in Toronto on Saturday night for having a gun.

The band waited until playing their 18th song Out Ta Get Me at the sold-out show in the city before Axl Rose made light of the incident in front of the 50,000-strong crowd.

He says: “You did what? ‘Oh, yeah, we found a gun.’ So we weren’t exactly arrested, we were detained. They were very nice – they were very understanding.

He adds sarcastically: “You know, it happens. You can forget you had a fucking gun. Wasn’t my gun.”

A band representative tells Billboard that the weapon didn’t belong to any member of the group, but confirmed the incident did take place.

They say: “Yes, this indeed happened on Friday, July 15, as they were crossing the border coming from the Philadelphia tour stop on the 14th.”

Guns N’ Roses are on the road on their Not In This Lifetime tour, with Rose joined in the lineup by Slash and Duff McKagan. Original drummer Steven Adler joined the band onstage recently, appearing at shows in Nashville and Cincinnati.

Guns N’ Roses Not In This Lifetime tour remaining dates