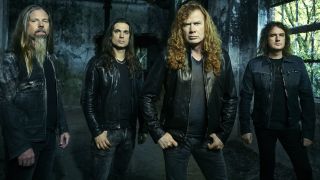 Megadeth guest drummer Chris Adler is delighted to be part of the band as they enjoy a return to glory – but he refuses to take any credit for it.

He appears on their latest album Dystopia, which has sold better than several previous titles and received more positive reviews.

The Lamb Of God man, a long-time fan of Dave Mustaine’s outfit, has an open invitation to become a full-time member whenever he wants, but prefers to remain with his own band.

Adler tells SkullsNBones: “It’s great to be part of my favourite band coming back to life a little bit. Not that they ever went away – but you can see the difference with this record, the numbers, and the response to it.

“It’s different. I’m not taking credit, but it’s nice to be a part of.”

He adds that he feels like much more than a hired hand. “When I first got the call, you expect to go in as a session guy,” he says. “Then Dave asked me to tour and I expected to be a kind of weekly employee.

“But we’re friends – we’re joking around, we’re going on NASCAR rides, tank rides, and going curling with David Ellefson up in Canada.

“It’s just ridiculous stuff and it’s so stupid, but we’re really having a good time.”

Adler reveals that, despite being a Megadeth fan, he’d never tried to play their back-catalogue songs until he was working with them.

“I’ve just gotten to the point now, after months and months of touring, where I’m comfortable, so I can really rock out to these tunes,” he says.

“I’ve never really learned any cover songs before this, so it took me a long time to get comfortable. At the same time I’m here for a reason – Dave is a smart guy, and so I’m trying to add in my little things here and there.”

Mustaine said last week that he was taking care to avoid any potential problems between Megadeth and Lamb Of God. His band are currently touring the US and return to Europe in June, including an appearance at this year’s Download festival at Donington on June 11.