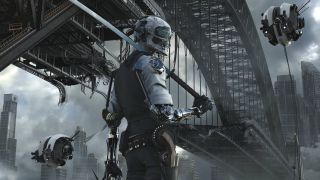 Dystopia is Megadeth’s first studio album since 2013’s Super Collider, and if you haven’t listened to it yet then WHAT THE HELL ARE YOU DOING? Of course if you’re unable to listen to it because you’re on the loo/in church/in the vacuum or space, then we’ve created this track-by-track guide so you know what your puny ears are in for. Get ready.

The Threat Is Real

Megadeth’s fifteenth studio record begins with exotic crooning, before giving way to a buzzing riff which has Dave Mustaine’s distinctive fingerprints all over it. By the time the chunky verse kicks in (fans of that riff in the middle of Ashes In Your Mouth will be delighted to hear a similar version return here in a more prominent role, 24 years later), overlaid with Mustaine’s throaty predictions of impending doom, it’s clear Dystopia means business. There’s a catchy chorus to boot. What more could you want from an opening track? Nothing, that’s what.

To generalise horribly, we’re in Hangar 18 territory with this title track. Not that Dystopia replicates that longtime Megadeth live mainstay – it’s just that it employs the kind of brilliantly unique melodies and tempos the band discovered during the Rust In Peace sessions, before diving head-first into a vat of steaming lead breaks. The result is one of the band’s more memorable songs in a while. Interestingly, this is the second song of two so far to mention cancer in the lyrics. Hopefully this isn’t going to be a cancer concept album…

… Nope, no mention of cancer here. Hooray! After a discordant beginning, an unaccompanied Dave Ellefson bass rumble takes us right back to the first album, Killing Is My Business… And Business Is Good. This moment rather sets the tone for the rest of the song, which is redolent of Peace Sells… era Megadeth: up-tempo and aggressive, with the quirky time signatures we’ve come to expect. After the title-track, this admittedly feels more like a collection of riffs than a wholly united song. But crucially, it’s a collection of great riffs – and we’re loving the old-school flashback.

More heaviness abounds here, as you’d expect from a song called Death From Within. As the focus returns to more traditional song structuring, weighty verses melt into a chorus which manages to be tuneful and rock-solid at the same time. “Nowhere to run, nowhere to hide, no-one is safe…” sneers Mustaine, while wondering why he doesn’t get invited to more parties. Plenty of flash guitar runs from Dave and new guy Kiko Loureiro help make this track a fine showcase for Megadeth 2016.

Bullet To The Brain

Clean acoustic strumming makes you think the album is finally going to belch up a ballad. But no, in come the riffs and lots of ‘em. A relatively slow track, but stuffed with busy guitars. The chorus takes a slightly unusual and anthemic approach for Megadeth, which will no doubt work well if they ever play this live. We’d be lying if we said this was a stand-out track, mind you, no matter how lovely the guitar breaks are. But they can’t all be stand-out tracks. Can they?

Long-term fans feeling starved of some good old-fashioned Megadeth chugging (Angry Again and Kill The King, anyone?) will start air-punching around about now, as Megadeth ease off on the technical fireworks display and simplify their MO. Over some bruisingly basic riffage, Mustaine once again produces his crystal ball… and surprise surprise, it ain’t lookin’ good. “If you don’t like where we’re going,” he croaks, “you won’t like what’s coming next”. Gulp. Still, we like this song. A lot. And we love what’s coming next…

Welcome, one and all, to the album’s finest track and one which makes it into Megadeth’s all-time Hall Of Fame. This six-minute gem sees the band creatively firing on all cylinders. The brooding acoustic intro, building to something… which turns out to be one weighty mother of a riff, built like a rolling Sherman tank. The greatness of Poisonous Shadows lies partly in the contrast between that riff and the haunting vocals, which lead to a quite superb, epic chorus. Some peculiar synths and an overall sinister feel – check out those dying seconds – make this something seriously special.

The stories behind the songs on Megadeth – Dystopia

Now there’s a title. Part of us wishes the album had been called this. In fact, every part of us wishes that. Mind you, this would have made quite an odd title-track, being a three-minute acoustic and electric instrumental. While Mustaine and Loureiro’s lead work is once again exemplary, we’re not sure we’d like to encourage this sort of thing. Especially as Conquer Or Die is frankly no Into The Lungs Of Hell. While that 1988 instrumental painted vivid pictures in your mind, Conquer Or Die only conjures up two guys soloing impressively in a studio.

Almost as if conscious of the previous track’s indulgence, Lying In State whips the intensity levels right back up, being the fastest track on the album, all driving urgency and speedy vocals. Riffs fly past your ears, fast as bullets, while Mustaine once again presents a pessimistic view of the hand-basket we’re all in, destined for Hell. Classic Megadeth, in other words, and we wouldn’t have it any other way.

The verses employ a different kind of groove for Megadeth, hinging on a stop-start riff rooted more in hard rock. “Who do you think you are – some kind of superstar?” spits Mustaine, railing against all-surface-no-feeling culture. He also employs the beautiful rhyming couplet, “You make me sick / You prick”, which would make a glass eye cry. A really welcome burst of aggression and disgust, which ends the album proper on a suitably phlegmatic note.

You could argue that Megadeth’s clinical musicality doesn’t lend itself so well to punk covers, but Dave Mustaine’s voice certainly suits the genre. And isn’t the point of covers for a band to put their own stamp on the original? So this version of the LA band Fear’s 1982 song is a pleasingly zippy rabble-rouser, which lyrically compliments Mustaine’s own cynical style, providing a nice bonus at the end of an album awash with powerfully modern Megadeth.

Dystopia is out now, via Universal.