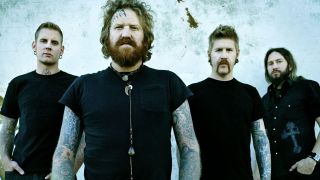 Mastodon have announced a UK tour for later this year.

Fresh from their weekend appearance at the Download festival, Brann Dailor, Brent Hinds, Bill Kelliher and Troy Sanders will return to the UK in December for a run of seven shows.

They’ll get under way on December 2 at Cardiff’s Great Hall and wrap up with a set at London’s O2 Academy Brixton on December 10.

Tickets are available from My Ticket and See Ticket. See the list of dates below.

Mastodon have lined up the shows in support of their latest album Emperor Of Sand, which was released back in March.

Speaking about the recording sessions, drummer and vocalist Dailor paid special tribute to Hinds’ playing on the follow-up to 2014’s Once More ‘Round The Sun.

He said: “Brent’s guitar playing is insane – it’s beautiful. He’s got that beauty and he’s got that originality. There’s nobody else like him. You can’t replicate it, you can’t duplicate it – no one can’t touch it.

“His solos are really just amazing on this album. There’s a whole bunch of them and they all sound unique. I think he’s gone above and beyond.”

Mastodon will headline the Metal Hammer Golden Gods in association with Orange Amplification tonight (June 12). Also playing at the event will be Orange Goblin, Clutch and Avatar.

You’ll be able to keep up with all the news from the Golden Gods on our live blog and via Facebook Live.

TeamRock Radio returns to the air