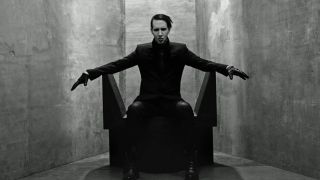 He’s issued four clips over the last month, with the newest video filmed from the front seat of a car. It then flicks to the mysterious symbol from other clips and then cuts to a shrouded figure.

It could be that the shock rocker is gearing up for the release of his new album Say10, which was expected to launch on February 14 this year, but that date passed with no news.

In November last year, Manson issued a brief teaser video for the track Say10 which saw him tear pages from the bible and focus on the bloodied body of a man in a suit – thought to represent then Republican candidate Donald Trump.

He said at the time: “As an artist my duty is to ask the questions. The viewer must answer them.

“Either way tomorrow goes, the visuals are meant to create contemplation. Because it’s obviously bigger than just tomorrow. It’s about the desperate acts of people who believe something that is preached by an unbeliever.

“Right now we’re in such a state of confusion when it comes to religion, politics, sexuality, and how they all tie together, and it’s being turned into a circus and a sideshow – and that’s something that I’ve been described as a ringleader of.

“It seems like a time for me as an artist, and as an American artist, to make something that causes a new set of questions to arise that aren’t simply statements.”

Watch the short clip below.