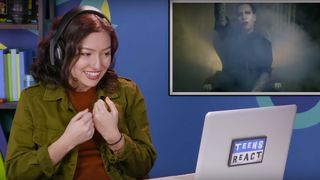 It’s weird to think, but it’s been almost two decades since Marilyn Manson was public enemy number one. Courting controversy everywhere he went – thanks to both his look and behaviour – he was the antichrist, the boogeyman, the reason you weren’t allowed to listen to ‘that devil music’. Of course, nowadays, music has evolved and The Double M’s gothic persona no longer sends grandmas into fits of terror. But what do the youth of today make of the man who was the voice of the lost generation? The man who spoke to millions disillusioned teens across the world, uniting them through a communal hatred for the mainstream and abusive authority.

A group of teenagers (aged 15 to 19) were played various Manson videos to gauge their reactions. The videos included some of Mazza’s biggest hits, from The Beautiful People to This Is The New Shit. So far, so normal, you might think. But not everyone was impressed, and some really didn’t like it.

Here are some choice comments:

“Satanic music”
“He’s ultimate edge”
“Do people actually listen to this?”
“He’s a weird dude but I love him”
“I don’t think I could listen to this and enjoy it”
“Oh my god, he has boobs”

It’s fairly one-sided when it comes to deciding if they’d ever listen to Marilyn again. Everhet really isn’t keen on the idea, but Sabrina D is fully in on the Pale Emperor himself.