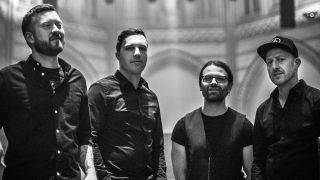 Long Distance Calling have released footage of their performance of Metulsky Curse Revisited.

The clip has been selected from the band’s first-ever live album Stummfilm: Live From Hamburg (A Seats & Sounds Show), which will arrive on November 1 through InsideOut Music on Blu-ray/2CD, gatefold 3LP and on digital and streaming platforms.

Long Distance Calling say in a statement: “We are happy to present you Metulsky Curse Revisited from Stummfilm: Live From Hamburg (A Seats & Sounds Show).

“Over the years, this song has become an integral and important part of our live sets, it’s the perfect ending for our shows. It’s always a pleasure to play it live and to see the reactions of the audience.

“Fun fact: The first version of this song was one of the songs from our first demo, which didn’t make it on our debut album.

“When we did a split EP with Leech a couple of months later, we decided to pick up this song again and rearrange and rewrite it, which happened on a single afternoon – it was kind of magical.

“It’s definitely one of our best songs and a fan favourite so we hope you will enjoy the live version as much as we do.”

Long Distance Calling have a handful of live performances planned over the coming months, including a set at the Winter Night Festival on December 21.