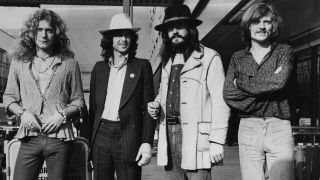 Led Zeppelin’s 1976 album The Song Remains The Same is to be reissued later this year.

The soundtrack to the band's concert film of the same name was recorded at New York’s Madison Square Garden in July 1973, with guitarist Jimmy Page personally overseeing the remastering of the new release, which is scheduled to arrive on September 7 via Atlantic/Swan Song.

The album will be released on CD, vinyl, on digital platforms, as a hi-res 5.1 surround sound Blu-ray and a Super Deluxe box set.

The box set will recreate the embossed cover of the original and will also be the first time the full-length film and soundtrack have been available in the same package.

Meanwhile, on the 4LP set, Page has changed the track sequence, allowing the 29-minute version of Dazed And Confused to appear in full on one side of vinyl for the very first time.

The Song Remains The Same is the latest release celebrating the band’s 50th anniversary. Earlier this year, How The West Was Won was reissued, while a 7-inch yellow vinyl featuring the Sunset Sound Mix of Rock And Roll and the Olympic Studio Mix of Friends was introduced to mark Record Store Day.

An official 50th anniversary photo book will be released in October by Real Art Press.

The Song Remains The Same Soundtrack

• 2DVD set of the The Song Remains The Same featuring the full theatrical version of the film plus bonus content, including four performance outtakes that were not part of the original film: Celebration Day, Over The Hills And Far Away, Misty Mountain Hop and The Ocean

• DVD of the full album in Dolby Digital 5.1 Surround and PCM Stereo, plus photo gallery

• Replica of the Japanese program from 1977, previously available only when the film first toured cinemas in Japan

• High-quality print of the original album cover, the first 30,000 of which will be individually numbered