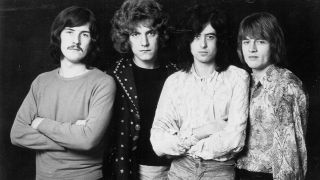 A trailer showcasing Led Zeppelin’s Record Store Day release has been made available.

The 7-inch yellow vinyl featuring the Sunset Sound Mix of Rock And Roll and the Olympic Studio Mix of Friends will be released tomorrow. It was produced by guitarist Jimmy Page, with both versions previously unreleased.

The single is the latest release celebrating the band’s 50th anniversary. A reissue of How The West Was Won arrived last month, while an illustrated book will be published in October.

In February, Page hinted that a new Led Zep live release was on the cards, telling Music Week: “I can’t give the game away, but there’s a recording that’s another multi-track that we’ll release.

“It’s so different to all the other things that are out there. It’s another view compared to How The West Was Won or The Song Remains The Same. I’m looking forward to people hearing that.”

Check out our list of the best 108 Record Store Day releases you can buy this weekend.