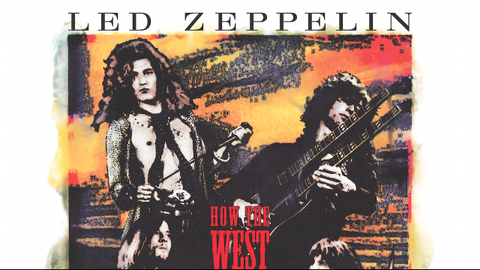 How The West Was Won is also available as 3-CD and 4 LP Super Deluxe Boxset. Housed in a lift top box, it contains:
- Remastered audio on three CDs and four 180-gram vinyl LPs.
- DVD of album in Dolby Digital 5.1 Surround and PCM Stereo, plus photo gallery.
- High-def download card of all stereo audio content at 96kHz/24 bit.
- A book filled with rare and previously unpublished photos of the band at each of the concert locations, plus memorabilia and ephemera.
- High-quality print of the original album cover, the first 30,000 of which will be individually numbered.

There can’t be any doubt that Led Zeppelin were the hottest rock group on the planet when they pummelled the Forum in Los Angeles on June 25, 1972 and destroyed Long Beach Arena two days later.

Jimmy Page considered the band were at the height of their powers at the time, following the monumental 1V. It wasn’t a question of how the West was won – America had already fallen – more why they didn’t prove it at the time by releasing a live album. Given that the Stones and The Who were happy to show off their abilities on stage with ‘Get Yer Ya-Ya’s Out!’ and Live At Leeds respectively, the absence of an official Led Zeppelin live record seemed contrary; after all, the soundboard tapes were in the archive.

That oversight was rectified in 2003 with the release of the three-CD How The West Was Won. Now, on the eve of the band’s 50th anniversary, Page has overseen a definitive remaster that doesn’t mess with the original. He is a stickler for integrity.

Yet the response from the message boards is lukewarm: there are no (legally) previously unavailable tracks from those Californian shows – no Tangerine, Louie Louie or Communication Breakdown. Is that a big deal? Not really. The integrity of the project didn’t allow for such tampering, and if those songs had been shoehorned in they’d have disrupted the balance. Probably a case of be thankful for what you got.

Of course it’s familiar. The snatch of LA Drone is followed by the three-minute warning of Robert Plant’s Valhalla screech in Immigrant Song, and Page showing off his full range, from madrigal to power chord crunch, on Heartbreaker. It’s what it is. Black Dog’s lascivious blues leer sounds a tad embarrassing at this juncture (it’s noticeable that Plant shows no interest at all in his own ancient history), but we can’t rewrite his past. Better to bask in the breaks as Over The Hills And Far Away transitions from British folk into the furiosity of John Bonham’s impersonation of someone detonating a device inside an iron and steel foundry.

And what is left to be said about Stairway To Heaven, except that it’s not even their best song? In terms of modern influence, Led Zeppelin sound more relevant on the Moby Grape-flavoured, mandolin-coloured Going To California, or the pastoral That’s The Way where you can hear Plant’s immersion in the work of Tim Buckley. Bron-Y-Aur Stomp also retains a rustic mystique that must have seemed exotic to those weaned on Whole Lotta Love but now feels bang on-trend thanks to John Paul Jones’s double bass expertise (his organ interludes on Since I’ve Been Loving You create similar resonance).

For all their hard rock legend it’s diversity that will keep Led Zeppelin’s name in lights. Page’s funky scratch on Dazed And Confused and Bonzo’s brutal drum outro still thrill, the psychedelic-metal-prog riffs on What Is And What Should Never Be are almost as astounding as Plant’s vocal; no wonder he keeps this one close when he plays his solo shows these days.

If that’s as good as it gets, obviously there are lesser moments of interest. Bonham’s Moby Dick drum solo is impressive but is also the cue to join the queue for a toilet break. The Houses Of The Holy tracks other than Over The Hills are hardly Led Zeppelin at their best. The Ocean didn’t prove to be anything special, while Dancing Days is unforgivably dull. Any more of those clunkers and the West would have been lost.

The same goes for the rather dutiful Chicago blues take on Willie Dixon’s Bring It On Home. Nice to hear Plant’s harmonica homage to Sonny Boy Williamson and Page’s chugging groove, but this was an encore waiting to be drop-kicked into the past and didn’t qualify as a ‘leave them wanting more’ killer when they had the three-chord trick of Rock And Roll in their armoury. Still, at least they kept the good bits for Black Dog on their ensuing 1973 US tour.

It’s worth remembering that sales of How The West Was Won didn’t match the glowing reviews it received 15 years ago. Will it fare better as a heritage piece? The calling cards for die-hards are all about the format(s). Take your pick from remastered CDs or four vinyl LPs, or the expected deluxe Blu-ray edition that comes with a memorabilia book and print of the original cover.

One person who won’t be listening in is Robert Plant, who recently announced: “I prefer to move forward. It’s as simple as that. I don’t want to be stuck in the past, like so many of my contemporaries.”

Led Zeppelin fanatics may read that muttering: “The royalties come in handy. Go West, young man, and seek your fortune.”