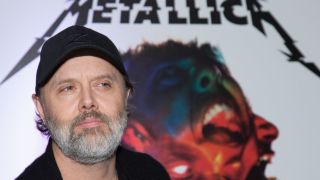 And he admits the band’s current way of working makes it more difficult to understand whether the project was going in the right direction while they created it.

The thrash icons’ 10th release has topped charts in dozens of countries across the world.

“You go to LA, you go to Denmark, you go somewhere else, and that’s all you got – nothing to do other than spend 12 hours a day in the studio.

“You make a record at home and life goes on, with kids and family responsibilities and all the rest of it.

“So you could argue we were probably less focused on this record for periods of time, including Record Store Day shows, Reading festival gigs, Lollapaloozas and all the rest of it. Sometimes it was not super-easy to know what was going on.”

He reports that other distractions included enjoying he current relationship he has with frontman James Hetfield and producer Greg Fidelman made it even more difficult to focus on whether the material was good enough.

“You can get high on the process,” says the drummer. “You lose your ability to tell what’s going on. You can get lost or delusional or misread things.”

Ulrich says he’s only listened to Hardwired… To Self-Destruct a handful of times, but he enjoyed it most when he listened while out driving with his wife a few weeks ago.

“We got three-quarters of the way into the record. We went to a place, had a couple beverages, then we drove back and listened to the last two or three songs. It was like, ‘This is pretty good.’”

He adds: “Every time I listen I’m like, ‘This is pretty fucking good, actually.’ I’m feeling, as I’m starting to get a little distance, that this record may be better than I was aware of.”

Metallica have just added another date to their WorldWired tour – they’ll play an intimate show for fan club members at the Opera House club in Toronto, Canada, on November 29.

The band say: “We can’t get enough of that hot, sweaty old-school small show vibe.”

The band are the cover stars of the current edition of Metal Hammer, on sale now in print and via TeamRock+.