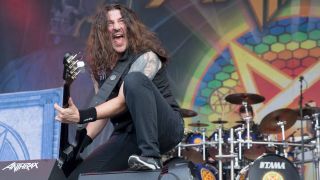 The global success of latest Metallica album Hardwired… To Self-Destruct is good for everyone in metal, Anthrax bassist Frank Bello has argued.

His comments come just after Metallica confirmed their 10th record had achieved remarkable results across the planet.

James Hetfield and co thanked fans for a launch weekend that included an intimate performance in London and their first-ever BBC session. Last week they were confirmed as the most-streamed metal band on Earth.

Metallica said: “Word has gotten to us that Hardwired… To Self-Destruct is number one in a staggering 57 countries, top three in 75 countries and top five in 105 countries. We’re not even sure we can name 105 countries!”

The band added: “What an insane, awesome ride it’s been. We are stunned, beyond grateful and truly appreciative that not only have Metallica fans embraced Hardwired…To Self-Destruct beyond our wildest expectations – but more importantly, we’re proud to see that hard rock and metal is still viable and matters in 2016 so to many people.”

Meanwhile, Bello tells The Strombo Show: “Any Metallica is great for all of us. Put that into the market and it makes people open up and listen to metal.

“That’s really important for all of us – it trickles down.”

Bandmate Scott Ian adds of Hardwired… To Self-Destruct: “I really dig the vibe.

“For me, it’s weird, because anything I say might be taken the wrong way. But I love the direction.”

Anthrax tour the UK and Europe in February, playing classic album Among The Living in full. Metallica continue to add dates to their WorldWired tour, and they’re the cover stars of the current edition of Metal Hammer, on sale now in print and via TeamRock+.

Anthrax: How We Made Among The Living