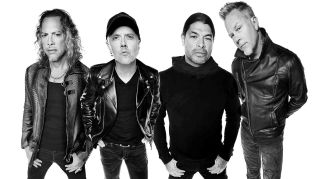 Lars Ulrich won’t quite promise – but he believes Metallica will release their 11th album before 2024.

There’s an eight-year gap between ninth title Death Magnetic, which arrived in 2008, and its follow-up Hardwired… To Self-Destruct, which arrives on Friday (November 18).

Ulrich tells Apple Music: “Everybody’s like, ‘Eight years – what have you been doing?’ It’s like, ‘Excuse me? We’ve been busier than we ever have in our lives.

“We spent three years touring Death Magnetic, we put two incredibly hard years into the Through The Never movie project. We did the dance with Lou Reed and we’ve played every festival on this planet multiple times. We’ve been to continents that are primarily inhabited by penguins.

“So it’s been a pretty busy eight years – and we’ve managed to record a record.”

He continues: “You can probably throw this back in my face, but I’ll go out on a limb and say it’s been such a good experience to do this record, and the whole vibe of these songs, I hereby officially predict, or hope, that it’s not going to take another eight years for another record.

“So there you go. I said it. Throw it back at me eight years from now.”

Frontman James Hetfield says his band’s approach is different, telling the LA Times: “I don’t want to think we’re trying to stay young by writing new stuff – but it makes us feel relevant.

Metallica have just added their first-ever date in Beijing, China, to their 2017 touring schedule. Announcing the January 18 show, they say: “Those of you who are astute watchers of the schedule will notice there are still few dates open, between opening night in Seoul and the Singapore show. Keep watching…”

Hardwired…To Self-Destruct arrives via the band’s Blackened Records label and it’s marked with a launch event at London’s House Of Vans on release day. Metallica are the cover stars of the latest edition of Metal Hammer, on sale now in print and via TeamRock+.