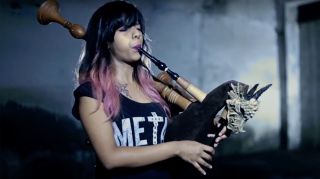 An Indian musician has released a video for her Lamb Of God medley – performed on the bagpipes.

Archy Jay – aka The Snake Charmer – runs through Lamb Of God’s tracks Walk With Me In Hell, Again We Rise, Laid To Rest, Broken Hands, Hourglass and Descending in the video, which can be viewed below.

Archy tells TeamRock: “I have come out with a new metal video which is actually the first Lamb Of God cover played on bagpipes.

“It’s a metal medley of some of the most iconic Lamb Of God riffs, all in one video. Its’ a different sound and different perspective than listening to these on guitars.”

She adds that she had to put in many hours of work to master the riffs. “It’s one of the toughest tracks I’ve tried to play on the bagpipes. I love this band and I know many of you love them too.”

Archy fell in love with the bagpipes when she saw a pipe band performing in India, and later travelled to Scotland for a training course to help her progress.

This week, Lamb Of God released a video for their track Embers. The song was written by guitarist Mark Morton who revealed the real-life tragedy that inspired the lyrics.

It was written after the death of his baby daughter Madalyn Grace.

Lamb Of God have several dates remaining on their world tour in support of VII: Sturm Und Drang.

The 10 best uses of bagpipes in rock