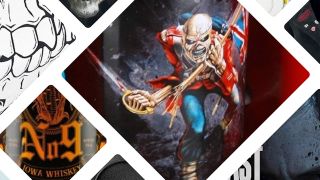 Welcome to July – a month that brings with it the hope of better weather and even the possibility of a holiday somewhere.

And while it’s been a tough time with no tours or festivals to look forward to, we’re here to lighten the mood by selecting a number of must-have items that are sure to be of interest.

From CDs and a great Maiden mug, to a face covering that'll catch a few shocked looks, the new Slipknot whiskey and more! Dive in!

Get your morning off to the perfect start with a tea or coffee from this rather splendid Iron Maiden mug based on the famous design for The Trooper. If your favourite caffeinated hot beverage isn’t enough to wake you up, then the sight of Eddie charging towards you is bound to do the trick.

With wearing a face covering mandatory on public transport and recommended if wandering about the supermarket getting your weekly shopping in, then jazz up your journey with this eye-catching loop scarf. It’s sure to make people get out of the way and can also be used as a bandana, headband, scrunchy or bracelet.

Yes! Slipknot’s No.9 whiskey is finally available in the UK! Fans first got the chance to taste it last summer during the band’s North American Knotfest Roadshow – and now other parts of the world can get their hands on a bottle of the No. 9 Iowa Whiskey.

It’s bottled at 45% ABV and is a collaboration between Slipknot and the Iowa-based Cedar Ridge Winery & Distillery. All we need now is for Metallica to release their Blackened whiskey outside the US and then we can have a proper party!

Canadian musical maestro Devin Townsend recently released the Ultimate Edition of his latest studio album Empath. Spread across 2 CDs and 2 Blu-rays, it offers fans the definite Empath experience with a wealth of bonus material, including a new 5.1 surround sound mix, live cuts, an album commentary and more. Grab your headphones and be prepared for a sonic journey like no other!

The biggest game of the summer is finally here. The Last Of Us Part II on PS4 is the follow-up to Naughty Dog’s PS3 classic and takes place five years after Ellie and Joel's first memorable journey. While the terrific visuals will make your eyes pop, the intense combat and unsettling enemy hordes will get the old adrenaline pumping. Guaranteed! This limited edition steelbook version will be out on July 12 and is well worth snapping up now before it inevitably sells out.

Buy The Last Of Us Part II here

Let’s face it – Motorhead were one of the greatest rock bands on the planet. Lemmy and co always delivered the goods and they were a band loved not just by rock and metal fans, but music fans across the board. Motorhead may be no more, but this cracking leather jacket is bound to turn a few heads – and envious looks from other rock fans are guaranteed. The band’s famous logo is displayed on the front, with the logo and Snaggletooth design emblazoned across the back. We love this.

Hands up if you like a bit of horror? That’s seems to be quite a few of you. In that case, why not consider this amazing lunch bag and taking it with you wherever you go? Jason’s famous hockey mask is one of the most iconic horror movie props ever created, and this will make quite a statement.

Given that there’s no Download festival taking place in the UK this year, you’ll just have to be miserable in the rain somewhere else! Katatonia’s glum new album City Burials is the perfect soundtrack – and this accompanying t-shirt is pretty bleak too.

Originally published for the Wii back in 2010, Xenoblade Chronicles has been brought back to life on the Nintendo Switch for a new generation of fans to enjoy. Gone are the fuzzy visuals of the original, replaced by crisp and clear graphics which bring the stunning worlds to life. It’s one of the best RPGs on the market and this new, enhanced edition is not to be missed.

The latest in Ubisoft’s long-running Assassin’s Creed franchise was announced recently – and with the setting now placing you in the fur-lined boots of a Viking invader, we simply can’t wait for it to be released later this year. Now you can appease the Norse gods by purchasing this eye-catching Assassin’s Creed: Valhalla t-shirt which is exclusive to EMP. Perfect attire for when you’re cranking out a bit of Amon Amarth.

Iron Maiden’s CD remastered series has been hugely popular since it kicked off back in November 2018. All the band’s studio albums have now been released, offering improved audio to make those magic moments stand out even more. Well, now Maiden have turned their attention to their live albums – and what better way to get things started than with their incredible Live After Death offering? Not only do you get this classic album in full, but this particular version also comes packaged in a specially designed box featuring a 1:24 scale figurine of Eddie rising from the grave, and a patch featuring the grim reaper!

We’re all spending more time at home, so rather than just watching re-runs of your favourite show on Netflix, why not give the old grey matter a workout by immersing yourself in this face-melting Motorhead jigsaw puzzle? It’s the cover of their classic Overkill album and it has 500-pieces – more than enough to keep you occupied while you blast out your favourite tracks by Lemmy and co.

While the touring world has unfortunately had to press pause during the current global lockdown, that doesn't mean you can't represent your favourite artists. So while you're out in the sunshine for your daily walk, why not keep cool with this cracking Slipknot Baseball Cap? The Iowa heavyweights' distinctive logo is plastered in blood red across the front, so passers by will be under no illusion as to your metal roots.

Looking for more ace merch? Then check out our dedicated Slipknot, Babymetal, My Chemical Romance and AC/DC guides.