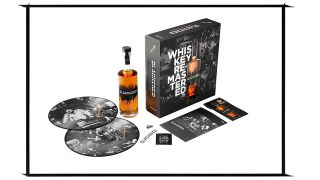 In 2018, Metallica launched their Blackened whiskey, named after the track from the band’s 1988’s …And Justice For All album.

They teamed up with distiller Dave Pickerell for the initial batches of the bourbon and rye blend, with the first – Batch 81 – named after the year the band were formed. Pickerell died in November 2018, with the responsibility of looking after the whiskey falling on the shoulders of master distiller and blender Rob Dietrich last year.

Now, Batch 100 has been announced – and it’ll come in a limited edition package featuring two vinyl picture discs, a Blackened fanzine, a pen, patch and guitar pick. The 12 tracks spread across both discs have been curated by Dietrich and includes live cuts and studio tracks.

Dietrich explains: “I wanted to add live versions to show the connection of the fans to the music, to the band, and to the whiskey. Nothing Else Matters is an acoustic version from the band’s first Helping Hands benefit show that James Hetfield verbally dedicated to Dave Pickerell just days after his passing.

“One is a song we listened to over and over again when I was deployed to Somalia during Operation Restore Hope and Operation Continue Hope. It was one of our anthems, and the energy of the crowd in this live version is incredible.”

Dietrich adds: “I am honoured to have the opportunity to be able to create a whiskey and pour so much of myself personally into the process. Music and distilling are two things I have dedicated my life to, and I do not take for granted how rare it is to be able to blend, literally, these worlds.”

Metallica drummer Lars Ulrich adds: “When I look at Rob’s playlist, I love the selections. I love the variety and I love that he’s gone for two deeper live tracks from the Damaged Justice tour.

“I love seeing both the Binge & Purge and Through The Never eras represented. And he even tapped the Helping Hands album, so it’s clear he is not a part-timer!”

Something unique about Blackened whiskey is that Metallica’s music is played while the whiskey matures in the barrel. The low hertz vibrations of the music “pummel the black brandy casks during the finishing process, agitating the whiskey and extracting more flavour from the wood.”

Each batch of Blackened has a unique playlist curated by the band members themselves, with Batch 100 the first time someone other than Ulrich, Hetfield, Kirk Hammett of Robert Trujillo has had a say in the music.

The Blackened fanzine features input from both Ulrich and Dietrich who talk about the creation of the whiskey, while the photographs were taken by Danny Clinch, showing behind-the-scenes glimpses of Metallica’s HQ and rehearsal space.

To mark the news, Ulrich has posted an unboxing video on the official Blackened Instagram page. Check it out below.

Blackened whiskey is only available to purchase in the US, with a list of retailers available through the official website.

@larsulrich has his and you can get yours at the link in bio. Supplies are limited. 🔥 BLACKENED™