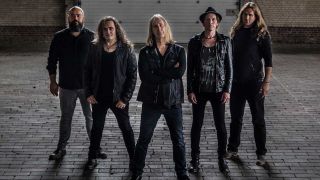 Kayak have announced they're no longer performing at this year’s Night Of The Prog in Germany or Midsummer Prog in the Netherlands as leader Ton Scherpenzeel continues to recover from a heart attack. Scherpenzeel was forced to cancel Kayak’s tour with The Flower Kings when he fell ill in October 2019.

‘I am doing okay,” says Scherpenzeel, “but I do not feel capable to give full power again. And for me, with Kayak it’s all or nothing. Can’t do it with the brakes on. And I am not going to force myself and stipulate a deadline now. No one’s going to benefit from that, least of all me.”

Meanwhile, the band’s management have announced that the delayed live double album Kayak Live 2019, will be released via Bandcamp in March. More details will follow nearer the time.

The recordings will be the first release since 2018’s studio album Seventeen which marked the return of the quirky Dutch band that originally formed in 1973.