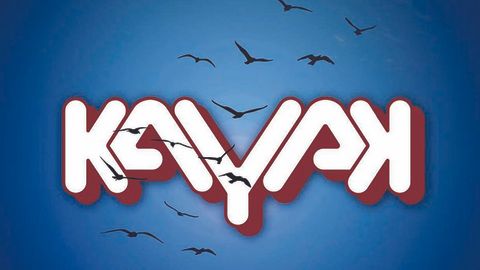 One of Holland’s biggest bands in the 70s, Hilversum-formed Kayak have closed shop then re-opened more than once, exercising a belief that the music matters beyond the personnel. Ton Scherpenzeel is now the carrier of the torch, the writer, keyboardist and all-rounder reviving the name and assembling a fresh line-up after a three-year break brought on by sudden departures. Bart Schwertmann is his new vocalist, Marcel Singor the guitarist. A rhythm section well known to fans of the Neal Morse Band joined as this album was already nearly finished. Guesting on the instrumental Ripples On The Water is Andy Latimer, Scherpenzeel having written the track with him in mind after working with him in Camel.

If this all suggests the type of camel that is a horse designed by committee (wonky, pasted together), rest assured that Kayak still sound like Kayak. Scherpenzeel’s firmly at the helm, and when he’s not playing everything, the others are (mostly) performing parts he’s penned. And what Kayak do best is blend melodic, adult pop songs with longer, symphonic prog pieces. Their mastery of the former is exemplified by three-minute opener Somebody, which echoes Cold As Ice by Foreigner with a lick of Supertramp at their most staccato. Schwertmann’s confident vocal declares he’s not going to be a perfunctory hired hand and has every intention to sing the living daylights out of this material.

The more concise numbers do a sterling job of keeping matters lively, but it’s the extended, definitively progressive rock tracks which see Kayak push upstream with a swagger in their stride. La Peregrina revels in bombast and makes frequent leaps from heavy riffing to syrupy opulence. Walk Through Fire opens like it’s scoring the fall of the Berlin Wall in 1989 before easing into piano-led balladry, eventually revving up for a climax which isn’t a million miles away from Steve Hackett’s latest work. The third biggie, Cracks, enjoys a lolloping guitar motif and stays in a high gear verging on the histrionic. To An End makes for a rather saccharine, maudlin closing piano ditty, but that’s been counterbalanced by Latimer’s earlier cameo, a textbook piece of restraint which encourages the more showy tracks to take flight.

You may be able to deduce from its title how many albums Kayak have made in their 45-year history (well, it counts as 45 if you overlook their complete split from 1982 to 1999), and given their apparent Lazarus-like ability to shrug off key members and regenerate, they might even make another 17. The abiding bravado and enthusiasm is infectious.