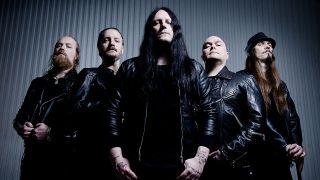 Katatonia have released a video for their new single Behind The Blood. The track is the second to be taken from their forthcoming new album City Burials, following on from debut single Lacquer released in January, and pays tribute to the band's youthful musical heroes. You can watch the video in full below.

“Behind The Blood is a celebration of the heavy metal music that we all grew up with, modified to fit the Katatonia universe," singer Jonas Renkse tells Prog. "Whilst lyrically it is telling the tale of dark revelry, to awaken the blood with the sound and taste of thunder.”

City Burials was engineering by Karl Daniel Lidén, while mixing and mastering duties were handled by Jacob Hansen, who says: “Once in a while you end up working with artists that are special, and that particular session being something you’ll remember forever. This session is one of them, and only for good things! Proud to say I mixed and mastered the new Katatonia album.”

City Burials will be released on CD, deluxe mediabook CD with two bonus tracks, black and coloured vinyl and on digital and streaming platforms.

Katatonia will perform at several festivals over the summer months, with details on a headline tour set to be revealed in the coming weeks.