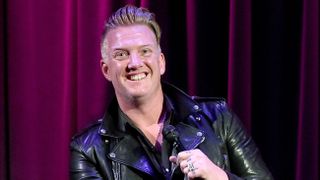 Josh Homme says he’s about to start work on the next Queens Of The Stone Age album.

The QOTSA frontman has had his hands full with his work in the Eagles Of Death Metal and with Iggy Pop, but he plans on getting started on the follow-up to 2013’s …Like Clockwork this month.

Homme tells Let There Be Talk: “Same lineup, we’re locked in. We’re having a meeting tomorrow about what we’re gonna do.”

Homme’s suggestion that the next QOTSA album will feature the same lineup as …Like Clockwork seems to rule out a return for former bassist and long-time friend Nick Oliveri.

But he still speaks fondly of Oliveri, even comparing his antics to that of the late Motorhead frontman Lemmy.

Homme says: “Nick is like Lemmy’s kid. I really miss Lemmy, because you always knew where you stood. Lemmy was, ‘I’m like this, so if you wanna hang with me, you gotta accept that.’ And Nick is the very same way. You always know where you stand with Nick.

“I love Nick. He has troubles like anyone else. But he’s a wild man and it would be a shame to change that.”