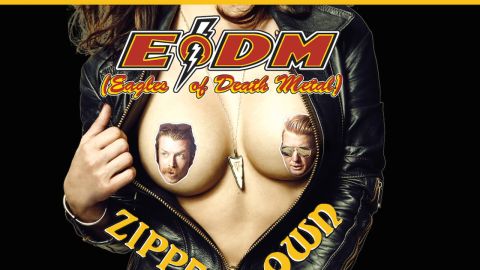 Josh Homme has always maintained that Eagles Of Death Metal are not merely a side project, although it’s fair to say they haven’t seemed particularly high on his priority list of late.

This first album in seven years, following Homme’s dalliances with Them Crooked Vultures and Arctic Monkeys and the return of QOTSA, finds him and Jesse Hughes doing pretty much the same thing as they did on 2008’s predecessor, Heart On.

Cue oodles of boogified riffs, huffy guitars, handclaps and a general consensus that the best times can be had at the leathered-up intersection of glam, punk and hard disco.

It is, of course, all knowingly dumb, a trashy repository for the juvenilia of two 40-something blokes out to recreate the youthful thrills of their old record collections. As if to ram home the idea, there’s even a crap cover of Duran Duran’s Save A Prayer, for Pete’s sake.

Highlights are the punchy pop-metal of Got The Power and the greasy glamorama of The Reverend, replete with satisfyingly fuzzy guitar, but Zipper Down misses as much as it hits.