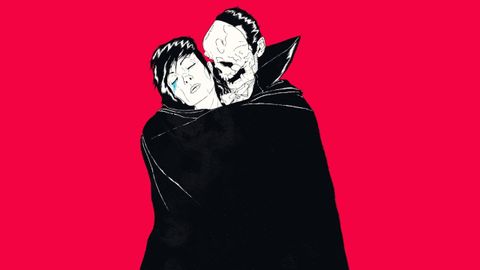 The myth and majesty of QOTSA was always in their immortality. These Palm Desert legends could neck all of the grottiest drugs known to humanity in one snort with nary a tweak of the blood pressure, bludgeon the sturdiest canyon rock from their instruments for decades without ever tiring, and crush lesser rock bands between their fingers like crackers. They’d been rocking since the stone age, and they would rock until the next. Or so we, and they, thought.

Then in 2010 their mountain of a mainman Josh Homme briefly died on the operating table during routine surgery and was revived with a fresh perspective on his life and music. The subsequent sixth album, several years delayed by the mojo-losing effects of Homme’s months of recovery, is wracked with vulnerability, insecurity, pained defiance and pleas for direction, protection and the comfort of loved ones. ‘If life is but a dream then wake me,’ Homme growls on ominous, pounding opener Keep Your Eyes Peeled, before announcing on sultry piano ballad The Vampyre Of Time And Memory, ‘I want God to come and take me home.’

‘Most everything you see, my dear, is purely for show,’ he admits on the title track. And I Appear Missing is Homme’s rawest lyric yet, exploring the trials he endured as he lost his musical drive in the recovery ward: ‘Pieces were stolen from me… The deeper I sleep the further down the rabbit hole, never to be found.’ ‘I survived, I speak, I breathe… I’m alive, hooray!’ he cries, but the wild times are over, and the hedonism that drove 2000’s Rated R and 2002’s Songs For The Deaf is gone.

Luckily, with it has also disappeared the Queens-by-numbers desert formulas that made Lullabies To Paralyze (2005) and Era Vulgaris (2007) sound like trod water. With a second chance at life comes a fresh urgency to grasp its possibilities. So, leaning on a host of rock pals for support (Dave Grohl, Trent Reznor, Arctic Monkeys’ Alex Turner, Scissor Sisters’ Jake Shears, estranged ex-bassist Nick Oliveri and Elton John), Homme varies his songbook to take in the insurrectionist poetry of If I Had A Tail, the psychedelic ventilator burbles of Kalopsia, the Muse squelches of Smooth Sailing and a beefed-up take on Blur’s Coffee And TV called I Sat By The Ocean.

Homme’s contributors are generally buried beneath his reborn sandstorm rock, although Elton emerging from the swarm of blustery demons on Fairweather Friend to howl the title is a moment of unintentional comedy. But their rejuvenating effects make this the most rounded and melodic QOTSA album in a decade, a triumph snatched from the mortuary doors.