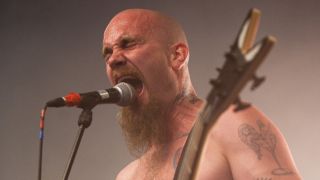 Bassist Nick Oliveri has confirmed he’ll rejoin Queens Of The Stone Age for six encores at their upcoming Halloween show in LA.

He was fired from the band in 2004 but has since worked with Queens’ frontman Josh Homme in Kyuss and recorded backing vocals on QOTSA’s latest album …Like Clockwork. He also joined the band on stage at a gig in Portland in April this year.

But Oliveri says while he wouldn’t rule out a permanent move, that decision isn’t up to him.

“I stopped asking him after a while and then he asked me! It’s pretty much just when he wants to do something these days. It’s not up to me.”

Along with playing six tracks with the band, Oliveri will open the gig along with the Kills

“It should be a very fun and interesting night.”

Oliveri released his solo album Leave Me Alone via Schnitzel Records earlier this month. It features contributions from Dean Ween, Phil Campbell of Motorhead, Bruno Fevery of Vista Chino and Blag Dahlia of the Dwarves. He is also lined up to play three UK shows in November.