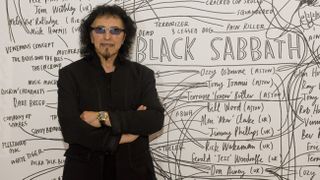 Black Sabbath fans are being asked to contribute selfies taken at this week’s Download festival for an art project examining the origins of heavy metal.

The Home Of Metal project was established in 2007 and explores the birth of metal and its origins in the Black Country and Birmingham – home of Black Sabbath.

In 2011, Home Of Metal exhibitions were held in major arts institutions in the UK and were visited by 200,000 people. The shows featured unseen artefacts, relics, memorabilia and personal stories sourced directly from fans alongside iconic items from bands including Sabbath, Judas Priest and Napalm Death.

Fans attending the Donington festival can submit a selfie taken at the site to Twitter or Instagram using the hashtag #homeofmetal and the pictures will be used to create a new online photo archive celebrating Black Sabbath’s The End Tour.

The archive – financed by the Heritage Lottery Fund and sponsored by TeamRock – will form part of a future exhibition to be launched in autumn 2017.

Sabbath guitarist Tony Iommi says: “An artist or band’s success can be measured by their relationship with the fans and the success of the Home Of Metal exhibition brought home just how dedicated and loyal ours are.”

The latest Home Of Metal project launches at Download on June 11 (Saturday). For more information, visit the official website.