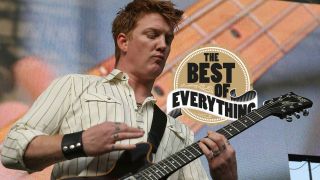 At the age of seven, Eagles of Death Metal frontman Jesse Hughes was moved from his hometown of South Carolina to Palm Desert, California, after his mother made the decision to get her family away from Jesse’s increasingly abusive father. Already unsettled by the disturbing scenes he’d witnessed at home, his new surroundings felt totally alien to Hughes – he was a redheaded, awkward young boy with a southern accent surrounded by hip Californian kids, and soon found himself to be the perfect target for playground bullies.

Thankfully for Hughes, he wasn’t the only the only redhead in the desert. The other – built like a Viking with a sense of nobility beyond his age – went by the name of Joshua Homme. One day, when the playground bully was picking on Jesse, Joshua stepped in and saved the day. From that moment on, Hughes’ school days were bully-free, and he and Joshua have remained best friends ever since.

Who better then, to discuss the merits and meanings behind some of the songs by Homme’s revered rock collective Queens of the Stone Age, than his Eagles of Death Metal bandmate and closest confident since childhood, than Mr Jesse ‘The Devil’ Hughes, aka Boots Electric…

I THINK I LOST MY HEADACHE (Rated R, 2000) A killer rock song with a middle-Eastern flair, and yet another demonstration of my best friend’s ability to turn a word and a tune. It’s always good to lose your headache, so this became a favourite of mine on title alone. But beyond that, it’s Queens at their raw finest, and that’s why I love it.

THESE AREN’T THE DROIDS YOU’RE LOOKING FOR (Queens of the Stone Age, 1998) This is one of my favourite Queens songs because it demonstrates Joshua at his hilarious best, and also in rare drug-induced form when he was leading a thousand people to their home in rehab, which is what he does – he’s the Pied Piper of rehab.

I SAT BY THE OCEAN (…Like Clockwork, 2013) This is from the latest Queens of the Stone Age album …Like Clockwork. Now, for me, I have a prejudiced viewpoint because I was with Joshua the entire time he was making this album, so I’m able to see it from maybe a different perspective. But whilst I Never Came is one expression of heartbreak in the music business, I Sat By The Ocean is a perfect example of the rage of jealousy that one can experience, especially in our grand circus of rock ‘n’ roll.

GO WITH THE FLOW (Songs for the Deaf, 2002) Next up, from Songs for the Deaf, it’s Go with the Flow. I covered a version of this song myself because I love it so much, because this really is Joshua’s operating anthem. It’s his operating paradigm – relax, just go with the flow. But also, what it really says is that people who go with the flow are cowards, and unless you have something worth dying for, you have no point to live.

NO ONE KNOWS (Songs for the Deaf, 2002) This song is also from Songs for the Deaf, and it’s a great song about secrets. If you know anything about the music business, you’ll know that a grand and great career in the music business is often built upon a pyramid of secrets and falsehoods. Remember folks, if at first you don’t succeed, destroy all evidence that you ever tried and kill every fucking witness.

BROKEN BOX_ (Lullabies to Paralyze_, 2005) This is a testament to wanting to get laid too bad, and not having the box to do it. It’s about a broken ‘you know what’.

MEDICATION (Lullabies to Paralyze, 2005) This song is incredible. Because I’m a drug fiend of the highest order, I understand the concept of medication. So in the spirit of medication… take it!

THE VAMPYRE OF TIME AND MEMORY (…Like Clockwork, 2013) Joshua is a very profound thinker, and when he is able to really dig in to that he comes up with grand insights into the human psyche. I believe in my heart that some of the greatest psychologists and psychiatrists in the world are really just songwriters, because when you listen to a song that speaks to your heart, you’re being counselled whether you know it or not. The Vampyre of Time and Memory is the thing that sucks upon all of us. When your favourite people fade into the fuzziness of old memories and you can’t really see them, you’re being sucked on by that vampire.

Jesse Hughes was speaking to Matt Stocks. Eagles Of Death Metal’s new album, Zipper Down will be released in October.