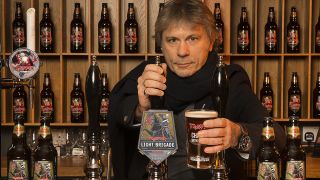 Iron Maiden have announced that they’ve teamed up once again with Robinsons Brewery – this time for Light Brigade ale.

It’s described as a “unique golden English ale” and comes in at 4.1% ABV. It’s been created to support UK charity Help For Heroes, which provides recovery and support for the Armed Forces community whose lives are affected by their service.

Six pence from every pint and 5p from every bottle sold will be donated to the charity.

Maiden’s Bruce Dickinson worked once again with Robinsons head brewer Martyn Weeks for the new product, with the frontman saying: “We are very proud to have been asked to get involved.

“I have been an instructor on several of British Airways’ flight simulator Flying Heroes days for Help For Heroes veterans, so I know the charity and the work that they do well.

“Light Brigade is our interpretation of a golden ale that maintains the elements of strength and character that are the essence of Trooper but at a more sessionable level. In fact, the two beers complement each other very well.”

Weeks adds: “Bruce and I were recently invited to visit Help For Heroes in Wiltshire, where we had a tour of the incredible recovery facilities there and met some of the veterans.

“We were both hugely impressed with the work they are doing and launching a new beer in support of this charity is, we believe, a great way to raise money and awareness for this very worthy cause. Robinsons will also be supporting the charity through fundraising in our pub estate.”

Help For Heroes director of marketing and fundraising Beth Miles says the charity are thrilled that Light Brigade has been brewed for for them.

She adds: “We are sure that Light Brigade will have a very popular appeal and raise significant funds, enabling Help For Heroes to empower more veterans to reach their potential and regain their purpose.

“This is the beginning of a partnership which we hope will see Trooper fans and Robinsons customers join The Force For Good campaign to support the thousands whose lives have been affected by their service.”