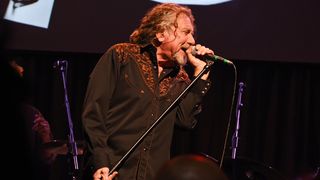 Robert Plant And The Sensational Space Shifters’ performance at David Lynch’s 2016 Festival Of Disruption is to be released on DVD.

It will launch on February 9 via Eagle Rock Entertainment and will feature tracks including Black Dog, Whole Lotta Love and Babe, I’m Gonna Leave You.

The set from the Ace Hotel, Los Angeles, was originally broadcast on AXS TV in March last year and was described as showing “the music icon at the top of his game, putting his signature vocals and effortless charm on full display as he blazes through an expansive setlist that will satisfy both die-hard fans and curious newcomers, alike.”

Proceeds from sales will go towards the David Lynch Foundation, with the DVD also featuring interviews with the TV and film director.

Plant will head out on tour across North America next month in support of his latest album Carry Fire. Find further details below.

Robert Plant interview: 'people spat at us because we were hippies'