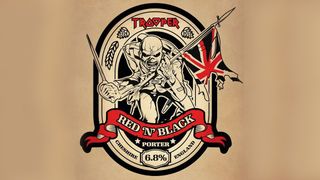 Iron Maiden will release the third variant of their Trooper beer in September, they’ve announced.

Trooper Red ’n’ Black is inspired by the song The Red And The Black from latest album The Book Of Souls. It’s a rich porter that looks black but glows red when lit up, and clocks in at 6.8%ABV in a bottle, or 5.8%ABV from a cask.

It follows the original Trooper, launched in 2014, and the stronger 666 edition that arrived in 2015.

“With millions of pints sold in 55 countries, Trooper remains a phenomenal success. This year we’re happy to be releasing another limited-edition beer that broadens the Trooper range in an ever-evolving, vibrant market.”

Full details will be revealed in due course.

Meanwhile, Iron Maiden’s Ed Force One plane is set to return to service after an accident in Chile earlier this month.

Two of its four engines needed replacing following the incident in which two airport staff were injured. But the Boeing 747 will return to service today (March 22).

Dickinson, who’s piloting the vehicle as well as fronting the band, says: “The speed and thoroughness of this incredibly complex operation was stunning, and we are so very pleased to get our plane back.”

The band’s Book Of Souls world tour continues, with dates across the world until August, including a headline spot at this year’s Download festival at Donington.