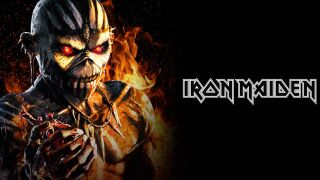 Iron Maiden have announced a further European leg of their Book Of Souls World Tour for 2017 – with a string of UK shows included.

A total of 16 dates have been announced, kicking off in Antwerp, Belgium, on April 22 before three shows in Germany, eight in England, two in Scotland and one each in Ireland and Wales. The UK leg marks Maiden’s first full UK arena tour in six years.

The Antwerp gig marks Maiden’s first appearance in the city since the Killers tour in 1981.

Shinedown will be the support act on all 16 dates.

Iron Maiden bassist Steve Harris says: “As it’s been so long since our last full UK arena tour, we really wanted to get to our fans in as many cities as possible.

“The whole band is really enjoying this tour and although we love playing festivals and stadiums, it is terrific to return to the intimacy and atmosphere of arenas.

“The songs from The Book Of Souls album and the new Maya-themed Eddies and stage sets have gone down really well and fan reaction has been amazing.

“And of course we know our fans appreciate us playing a lot of the older songs too, which we will continue to do.”

The band say no further European cities will be added to the tour.

The announcement comes days after Iron Maiden vowed they would protect fans from ruthless ticket touts by implementing a paperless ticketing system for upcoming UK dates.

Shinedown’s Zach Myers says: “Iron Maiden are the kings of metal and one of the greatest live bands of all time. It’s an honour to be touring with them in Europe and in their home country and to play in front of their fans. We can’t wait to see you in 2017.”

Iron Maiden released their 16th album The Book Of Souls in September last year. They launched a world tour earlier this year onboard a new-and-improved Ed Force One, piloted by frontman Bruce Dickinson.

The tour opened in Florida in February and visited 36 countries.

Tickets for the 2017 European dates go on general sale from 9am on Friday, September 30. They will be available via TeamRock Tickets and other good ticket retailers.

Iron Maiden Fan Club members will be given access to an exclusive pre-sale, with information available via the official website.

A Trooper VIP upgrade package will also be available, giving fans early access to the venue, exclusive goodies as well as food and Trooper beer. VIP tickets cost £140 and gig tickets will need to be bought separately.

The Book Of Souls was named Album Of The Year at the 2016 Metal Hammer Golden Gods.