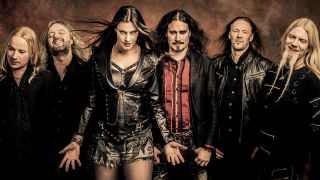 Nightwish leader Tuomas Holopainen has predicted that the band’s ninth album will continue the themes explored in last year’s Endless Forms Most Beautiful.

But he’s revealed he hasn’t written anything for the record yet, even though he’d normally be several songs into the project by this time.

Endless Forms Most Beautiful is the result of research on evolution and religion – the title is a quote by Charles Darwin, which he used to describe the environment we live in, and the record features a guest appearance by evolutionary biologist Richard Dawkins.

Holopainen tells Uber Rock: “I think we got about half way there. There will be more. We didn’t yet say all we have to say. It’s such a vast world of inspiration and we’ve only just touched the surface.

“I’d discovered authors like Carl Sagan, Richard Dawkins, Christopher Hitchens and Brian Cox, and for a couple of years I didn’t read anything else.

“I found it so inspiring, and I saw it as a good way to connect all the people in the band. I knew they had also become interested in this.

“Not everyone in Nightwish is keen on fairy tales and Tolkien – but we all had a mutual respect for this subject matter, and everyone played their parts with big smiles on their faces.”

Holopainen describes himself as “completely empty” after several years of hard creative work. “Usually by now I’ve have five or six songs,” he says. “I haven’t felt like doing any, but maybe it will come next year.

“If it does, that’s great – but if it doesn’t we’re not in any hurry. I will be surprised if inspiration didn’t come next year.

“I’m not taking any pressure, though. That’s the whole idea of having the year off.”

Finding Nemo: the making of the song that made Nightwish superstars