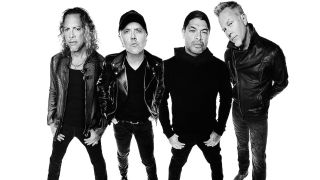 Earlier this week, Metallica announced the release of their new beer – the Enter Night Pilsner.

The brew is a collaboration between the band and Stone Brewing, with the beer previously only available at some of Metallica’s shows in North America.

It’s now set to be rolled out across Europe, Australia and China – and a video showing how the collaboration came together has been released by the brewery.

The 10-minute mini-documentary also shows the launch of the beer in the US, with co-founders Greg Koch and Steve Wagner meeting Metallica backstage and trying out the brew.

Koch and Metallica drummer Lars Ulrich also give fans in Minneapolis a surprise by asking them what they thought of Enter Night, before later footage shows bassist Robert Trujillo trying the pilsner at Ulrich’s house.

Speaking about the collaboration, Ulrich said: “The amount of ideals and outlooks that Metallica and Stone Brewing share are endless. I’m always blown away about how similar our paths forward have been.

“Our view of the worlds that we each inhabit, of creativity and process, and sense of place in relation to our peers and ‘The Man’ are almost identical. This collaboration is beyond effortless and pure, and we can’t wait to share this incredible beverage with everyone out there."

Koch added: “I remember seeing Metallica on the cover of a magazine just after the Black Album was released. On the cover was a quote that resonated with me to this day: ‘Metallica didn’t go to number one, number one came to them.’

“I loved what that meant. Do it your way and never compromise your art. If you’re great at what you do people will come. I view that simple quote as one of the founding philosophical elements of Stone Brewing.”

Metallica will return to the UK and Europe on the next leg of their WorldWired tour from May, while fans can vote for the best Metallica song of all time in our new online poll. Look out for the final results in the coming weeks.

The band will also launch their album Helping Hands… Live & Acoustic At The Masonic on February 1 through independent record stores and streaming and digital platforms.