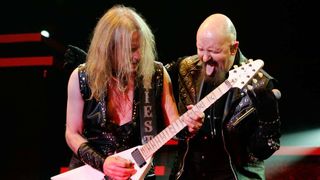 Guitarist Downing – who left the band in 2011 and was replaced by Richie Faulkner – said this month that he would only consider a return to Priest if they embarked on a “greatest metal tour” with other giants of the genre or as part of any future Rock And Roll Hall Of Fame induction.

Now Halford says the idea excites him too. He tells Metal Shock Finland: “I think that’s the dream of a lot of people, to imagine Maiden and Sabbath and Priest and Led Zeppelin. Can you imagine what that would be like at Wembley? Oh my God! It would just be mad.

“It would be like multiple nights. Forget about 50 shows that Michael Jackson didn’t do. It would be 100 shows at Wembley. So, yeah, it’s great to hear that there’s that passion still in KK’s voice for Priest.”

The vocalist adds that the band will have a follow-up to 2014’s Redeemer Of Souls written by the end of the year. He says: “I would like to think that by the end of this year we’ll have the bulk of it created.

“The thing about Priest is that we treasure everything that we do. We so love being in this band, Judas Priest, and we’re so aware of the legacy, all of the songs on the albums and the shows that we’ve made. It’s probably more important to us now than it ever was. But we can guarantee that we’ll give you another big solid dose of Priest metal.”