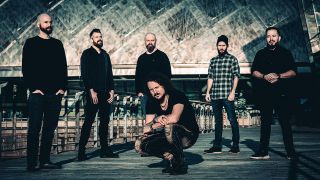 UK prog rockers Haken have released a video for their brand new single Invasion. The song is taken from the band's upcoming album Virus, which will now be released through InsideOut Records on June 19.

“Lyrically, Invasion deals with themes including but not limited to anxiety, depression and suicidal tendencies," the band explain. "We thought that the discussion of a "Virus of the mind" tied in well to the psychological themes touched upon in the sister record Vector and lent itself to the character development of Virus's manic protagonist.”

Virus is both a companion to the band's 2019 album Vector and also a concept album that explores the back story of the band's Cockroach King character.

“Since releasing The Mountain in 2013, one question has been asked of us time and time again: ‘Who is the Cockroach King?’," says drummer Raymond Hearne. “This is something we were interested in exploring more deeply too, so we essentially did that through our music – elaborating and expanding upon the intervallic, harmonic, rhythmic and lyrical themes of that song. The end result is in an arc which spans across two albums Vector and Virus.”

Virus has been again been mixed by former Periphery guitarist Adam 'Nolly' Getgood, who also worked with Haken on Vector.

“Using Nolly again was a no-brainer, as we wanted the two albums to be sonically connected," adds Richard Henshall. "But having just spent a day mixing with him in his studio, it’s obvious that this album will be an evolution of the Vector sound. These songs seem to allow a lot more freedom of creativity with the production, so we’re excited to see where it leads”.

Longtime Haken collaborators Blacklake have designed the visuals and artwork for the album, which will be released on CD, limited edition 2CD, gatefold 2LP/DC and on digital and streaming platforms.