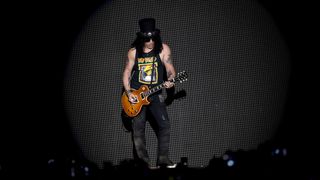 The promoter of the Guns N’ Roses reunion tour says the shows have been “an unqualified success” despite apparently poor ticket sales on some dates.

Frontman Axl Rose, guitarist Slash and bassist Duff McKagan announced their reunion earlier this year and made their comeback with gigs in Los Angeles, Las Vegas and at Coachella. They later announced a full run of dates under the banner of the Not In This Lifetime tour.

But some of the stadium shows have not sold well, according to fans and some media outlets. The Wall Street Journal reported that the GNR gig at Arrowhead Stadium in Kansas City, Missouri, saw 27,000 people attend the 70,000 capacity venue.

However, promoter Live Nation pointed out to Fortune that the venue’s capacity had been reduced to 35,380 for the gig.

And fans on social media claimed that the second of two nights at Soldier Field in Chicago had not sold well, with the first night selling out.

Live Nation says: “Guns N Roses’ Not In This Lifetime tour is an unqualified success. Not only is it the no.1 rock tour of the summer, it will be one of the top grossing tours of 2016 and one of the most successful reunion tours of all time.

“At six shows into the tour, it has already grossed more than $100million in ticket sales. Live Nation expects to surpass one million tickets sold and we congratulate the band on this monumental achievement.”

Appetite For Destruction drummer Steven Adler joined the band for two songs in Cincinnati this week.

Guns N' Roses: The Real Story Behind Their Reunion