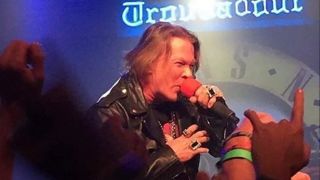 The show, in front of around 400 fans, consisted mainly of classics from their early years – although the title track from Chinese Democracy and Better were both performed, featuring Slash for the first time.

Recording devices were banned from the Troubadour, although several fans managed to post video clips and pictures.

Adler had been booked to play a solo show on April 1 at the Whisky A Go Go in LA, but it was cancelled last week, while promoters said the drummer was gearing up to make a “big announcement.”

Guns N’ Roses yesterday confirmed details of a North American tour to follow their six further reunion shows this month. The run is named the Not In This Lifetime tour – a nod to Rose’s 2012 quote when asked if a reunion would ever take place. The Cult guitarist Billy Duffy has said GNR are planning to perform elsewhere in the world too.

Guns N' Roses: The Real Story Behind Their Reunion