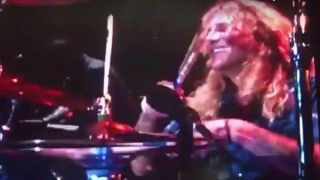 He played two songs – Out Ta Get Me and My Michelle – in his first onstage appearance with Axl Rose and co since 1990.

Frontman Rose introduced him to the Brown Stadium crowd by simply saying: “On the drums, you know this guy, Mr Steven Adler.” Adler, looking happy and healthy, grinned as he began Out Ta Get Me without comment. After the song Rose said: “I guess we should do another.”

Following My Michelle the singer repeated Adler’s name as he took his bows, hugged guitarist Slash and bassist Duff McKagan, threw his sticks into the crowd and left the stage, as current drummer Frank Ferrer returned.

Rumours had suggested that Adler would make an appearance at Guns N’ Roses’ first reunion show in Los Angeles in April, but he wasn’t present. His 1990 replacement Matt Sorum later reported he hadn’t been approached about any involvement.

The band’s Not In This Lifetime tour continues, with Slash having said at the weekend: “It’s still blowing our minds.”