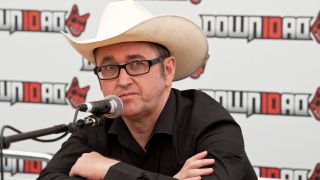 It was recently revealed that the band are the bookies’ favourites to headline Download 2017 – and the festival organiser says that Axl Rose and co are “more than welcome” to take the top spot at Donington next summer.

He tells exclusively TeamRock: “It’s the big anniversary of two big rock albums next year. One is Def Leppard’s Hysteria, the other one is Appetite For Destruction by Guns N’ Roses. It was a big year in 1987.

“I’d love to have the reformed Guns N’ Roses here, who knows? I’m certainly not giving any clues and I’ve not booked them, but that would be an amazing thing.”

He adds: “I think all the stick that he’d taken for joining AC/DC is hardly his fault. He did an incredible job. I thought he was amazing.

“The fact that he’s got the key members back together again and starting work in 2016 and singing with AC/DC – what an incredible year for Axl Rose.

“He’s obviously running the two at the moment, but then he’ll get into full-time mode with Guns N’ Roses within the next few weeks. I’ll guess we’ll see.

Guns N’ Roses will tour North America later this month on their Not In This Lifetime tour.