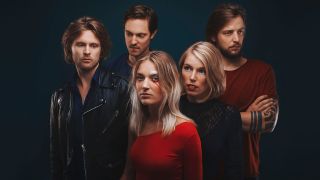 Dutch prog rockers Golden Caves have released a lyric video for Hide & Seek. It's taken from the band's second album Dysergy, which was released  through the Suburban Music Group label earlier this year. You can watch the video in full below.

“I love the contrast between the soft chorus vocals and the edgy roaring instrumental part underneath," says lead singer Romy Ouwerkerk. "What really resembles how small you can feel when you’re afraid you’re going to be a plague to someone you love. This song, these lyrics are very dear to me”.

The quintet, who formed at Rotterdam University in 2013 crowdfunded the ten-track  Dysergy. The album, which is reviewed in the latest issue of Prog Magazine (on sale Thursday) is described as "mixing the atmospheric grace of Radiohead, The Pineapple Thief and Iamthemorning with the hardened edge of District 97 and Porcupine Tree."