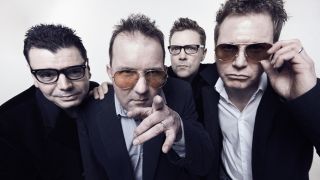 Frost* have announced that they’ll play a special show in London later this year.

John Mitchell and co will perform their 2016 album Falling Satellites in full at the city’s Dingwalls on November 24.

The band have also announced that they’ll record the show featuring their third studio album for a future DVD release and comes after a successful run of shows across the UK.

Frontman Jem Godfrey says: “All of us were absolutely staggered, flattered and honoured by the fans’ commitment. We had a great time on tour, laughed a lot and came home with a head full of great memories.”

Tickets for the Dingwalls show will go on sale from 10am on Friday, June 30 direct from the venue and via The Merch Desk.

Speaking about Falling Satellites – their first since album since 2008’s Experiments In Mass Appeal – Godfrey said: “It’s been a long time coming, but we got there in the end. I think this is our strongest album to date and moves the sound forwards while still referencing what’s gone before.

“It’s also great to have finally co-written some songs with John Mitchell in a Frost* context. The end results were better than either of us could have imagined, we just can’t wait to get out and play it all live now.”

Frost* will also appear at 2 Days Of Prog + 1 in Veruno, Italy, on September 3 and headline the Summer’s End festival in Chepstow, UK, on October 8.