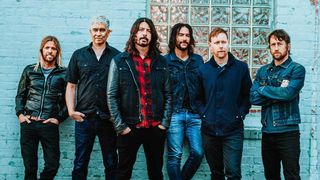 Foo Fighters have released a video for The Sky Is A Neighborhood, a song Dave Grohl describes as “the biggest thing sonically that we’ve ever done.” It’s taken from the band’s upcoming album Concrete And Gold, the follow-up to 2014’s Sonic Highways.

“One night I was lying out looking up at stars,” says Grohl. “Just imagining all of these stars as places that have life on them as well, and I decided that the sky is a neighbourhood, that we need to keep our shit together in order to survive in this universe full of life. But I had no music yet. I just had the title. So everyday I would walk around, kind of humming this thing in my head.”

The band then recorded the song in a single afternoon, working with producer Greg Kurstin, who’s previously with the likes of Sia, Beck, Pink, The Shins and Lily Allen. “And once we were finished,” says Grohl, “I thought ‘OK, now we have an album. This is it and we’re done’

“As we were mixing, I realised that we’d actually done what we set out do: to make this gigantic Foo Fighters record but with Greg Kurstin’s sense of jazz and melody and arrangement, something that we’d never done before.”

The video for The Sky Is A Neighborhood, was directed by Dave Grohl.

Continuing the space theme, the band have also launched a constellation viewer, which allows fans to explore the skies via their mobile phone, while “tiny Foo Fighters soundtrack your explorations at the bottom of the screen”.

You can configure the viewer by clicking here (mobile only).

The top 10 best Foo Fighters songs, as chosen by The Nyx